The initial plan was a good one. To get up early, have a quick breakfast and start sailing when other sailors start sailing: in the morning. The point is, that during the passed three weeks of having MILVA swimming in saltwater, we never managed to get out of the harbour before 3 in the afternoon. It was a cloudy day, Windfinder gave a forecast with wind from north-west of 4 beaufort. Our idea was to sail to Veere for a coffee. We started with coffee from my specifically for MILVA acquired Bodum french press (like all other dishes actually too fancy to use on a boat with the kitchen utilities stored in four wooden wine boxes) on the day after having met Roxani, Greg and the twins in Woluwe shopping mall. A special french press so to say. Even though I prefer espresso and Lola under circumstances of yachting the quick instant coffee solution. And the breakfast took longer, as I normally can spend hours sipping on a black tea, kind of meditation, and Lola went through some state of nostalgy telling Argentinian stories. 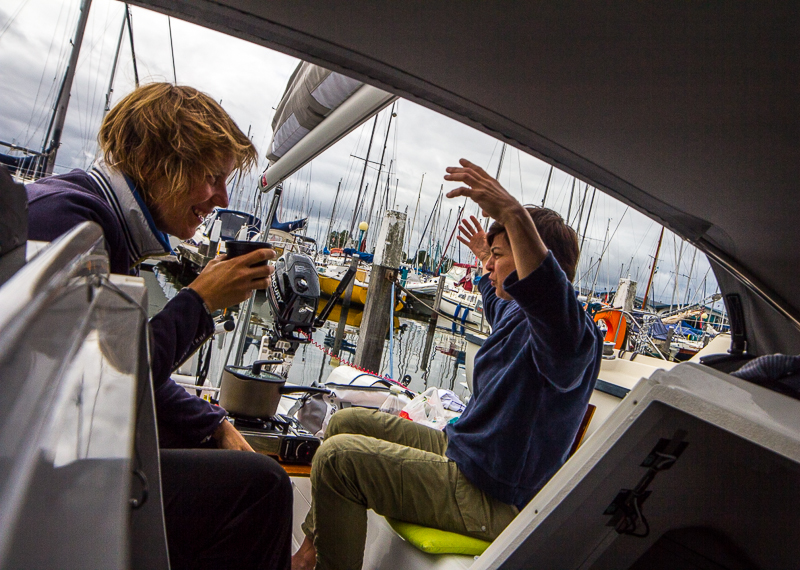 Around ten Lola started washing the dishes, the quick way – with cold water from the water hose attached to the berth. Everything was clean but during rinsing the french press filter attached to the metal stick on the pot’s lock the three metal pieces making out the filter went into the sea. underground. we could hardly see the three pieces due to the cloudy weather. “OK – I jump!” – Lola announced, Astonishing me, as i didn’t feel for swimming today. It took some time, some legs in the water, until I took initiative to make use of the scuba diving equipment and the thought that any sailor should be able to dive underneath her boat. I hate diving. It scares me. in several tries diving in 2m deep dark water, which was harder than what my memory gave of accomplishing the silver swimming badge at the age of 10, I could rescue two of the three metal pieces. the third one stayed on the ground, hidden under the dust, seaweed and oysters I dispersed during my panicking dives. We gave up. Seeing a french press some days later in a shop, the diving was totally useless anyway, as with the three metal pieces the most important part, a tiny screw, went underground too. And MILVA is just no submarine. 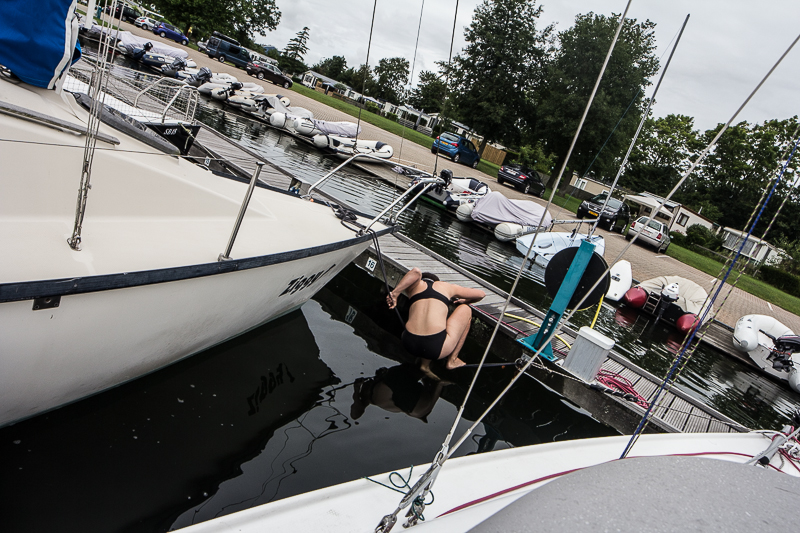 In the end, we departed at 1 p.m. and realizing at the corner towards Veere that the wind coming from the front is with 5 Beaufort just too strong to get there. So we turned and went back for two unnecessary Kiss & Rides 😦